In honour of Jake McDonald, former Senior Reclamation Inspector in the British Columbia Ministry of Energy, Mines and Petroleum Resources, the Technical and Research Committee on Reclamation offers a total of $2,000 in scholarships to students registered at a university (undergraduate or graduate) or college in the province of British Columbia.  Jake McDonald was largely responsible for the formation of the Technical and Research Committee on Reclamation.  This committee significantly improved government – industry – academic communications in the areas of environmental protection and reclamation in mining.

The applying student must be involved in mine reclamation, pollution prevention, environmentally sound mine planning, or any aspect of mine land rehabilitation.  The student must have a high academic standing and a genuine interest in the mining industry in the province and in maintenance of the environment of British Columbia and must be enrolled in a post secondary institute in British Columbia. The committee has $2000 worth of funds that they can award.

In 2016, scholarships were awarded to the following three students: 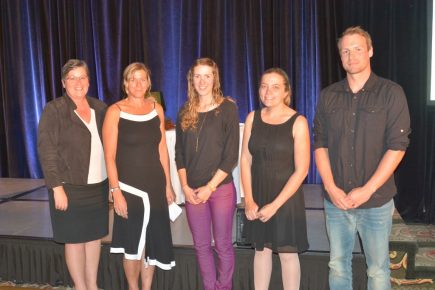 Katie McMahon is in the Master of Science program in the Faculty of Forestry at University of British Columbia in Vancouver, BC. She worked in the Environmental Department at the Mount Polley Mine for approximately five years and now is working on her master’s research which is to test and apply terrestrial reclamation methods that promote redevelopment of soil microbial communities and networks, and in doing so improve vegetation establishment, soil development and ecosystem resiliency. Katie is presenting a paper at the symposium titled “Mount Polley Mine August 2014 Tailings Dam Embankment Breach – Response and Approach to Remediation”.

Marika Green is an undergraduate student at Thompson Rivers University in Kamloops, BC in the Bachelors of Natural Resource Science program. Her area of interest is in reclamation/restoration and for her undergraduate research project she is following up on a previous master’s student project looking at treatments (raking/ hydroseeding combinations) on native grass and forb establishment at New Afton mine.

Paul Antonelli is in the Masters of Science in Environmental Science program at Thompson Rivers University in Kamloops, BC. He has presented at the TRCR as an undergraduate student and has acted as a student volunteer several times in the past. His masters research in on using soil amendments and nurse crops to restore native grassland on tailings site. Paul is presenting a paper at the symposium titled “Growth Response and Metals Uptake of Native Bunchgrasses during Organic Amendment-Assisted Phytostabilization of Alkaline Mine Tailings”.

Congratulations to all three students.