The Tony Milligan Book Award was presented during the 2014 TRCR banquet for most practical paper presented at the 2013 Symposium in Vancouver, BC.

Patrick Allard, Randy Baker, and Cheryl Mackintosh of Azimuth Consulting Group Partnership were presented the award for their paper entitled “Use of Ecological Risk Assessment to Guide Remediation at Teck’s Pinchi Lake Mercury Mine”  which they presented at the 2013 Mine Reclamation Symposium. 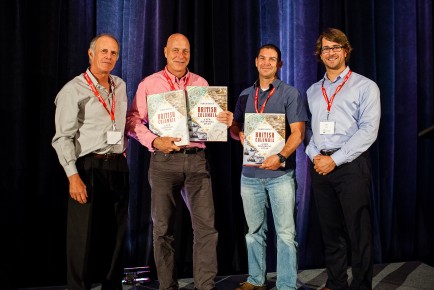 The Pinchi Mine roasted cinnabar ore to recover metallic mercury, operating from 1940 to 1944 (historic) and from 1968 to 1975 (modern). After 1975 it was placed on long-term care and maintenance until remediation began in 2002. Waste materials from both operations remain on site, within the lake (historic operation), a Tailings Facility (modern) and other  discrete locations. From 2004 – 2009 a terrestrial ecological risk assessment (ERA) was undertaken relying on literature, field investigations,  habitat surveys, spatially explicit food chain modeling, and development of toxicity reference values for methylmercury and other metals. Ecological risks were evaluated for 40 wildlife species.Only those species feeding primarily on insects or on small mammals indicated potential risks, mainly from arsenic, inorganic mercury, and methyl mercury from the Mill Site and Tailings Facility. A post-closure risk reduction analysis indicated that remediation of these areas would reduce risks to wildlife to levels acceptable by risk managers. Other areas, with elevated inorganic mercury in soils were deemed to pose negligible to moderate risk and were not targeted for remediation, based on a weighed evaluation of potential risks to wildlife from contamination versus disturbance to naturally recovering habitat.