The Tony Milligan Book Award was presented during the 2013 TRCR banquet for most practical paper presented at the 2012 Symposium in Kamloops, BC.

Becky Bravi, Terraforma and Bill Chapman, FLNRO received the 2012 Tony Milligan Book Award for their paper “Establishment of a Trial to Test Direct Seeding of Lodgepole Pine at Gibraltar Mine” which they presented at the 2012 Mine Reclamation Symposium. 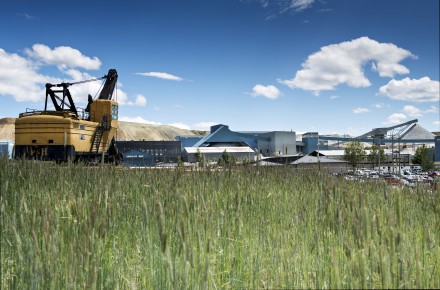 As the authors were not in attendance, Steve O’Hara, Gibraltar Mine accepted the Book Awards from Dirk Van Zyl, 2012 Papers Chairman and Dave Nikolejsin Deputy Minister, BC Ministry of Energy and Mines. 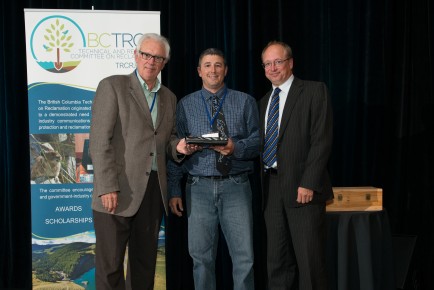 Recent work with lodgepole pine has demonstrated that with the correct symbiotic partners, it can fix nitrogen which helps explain its pioneering nature. Current reclamation of disturbed sites to conifers employs the use of container stock and is not wholly successful. Problems with using nursery stock include seedling shock from harsh conditions associated with mine spoils and pre-colonization of seedlings by symbionts found in, and adapted to nursery conditions. Historically, direct seeding of pine in forestry in British Columbia putatively failed because of seed predation and desiccation. These challenges may be manageable and/or may not be   important in reclamation work.

In the fall of 2011, a modified direct seeding trial using lodgepole pine was established on a rock dump covered with ½ meter of fine textured overburden at Gibraltar Mines in McLeese Lake, BC. Pinus contorta var. latifolia seed collected from the Gibraltar property had a laboratory germination success rate of 99% and was used to plant the 3 hectare trial. The site was mostly planted to bare seed with 4 14m x14m sub-plots planted to various  combinations of seed and symbionts. The theory, methods employed and experimental design of this trial and some of the challenges encountered are described. Download the Award Winning Paper