Due to the joint Mine Closure Conference in 2011, a book award could not be given at that time. Therefore, the Tony Milligan Book Award was presented during the 2012 TRCR banquet for most practical paper presented in 2010. 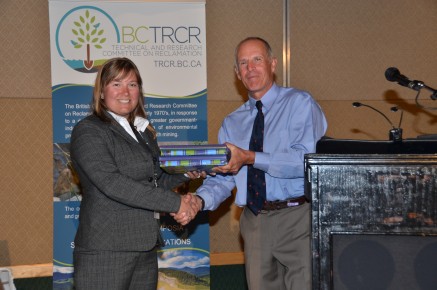 The general reclamation strategy for the Kemess South Mine site marries long-term erosion control with successional reclamation principles. For disturbed areas, this requires proper preparation of surfaces, application of growth media, and reintroduction of native pioneer species to initiate successional processes of recovery. The focus of reclamation during mine operations has been on the inactive areas of the tailings dam, waste rock dumps, and expended construction borrow areas. The tailings are retained behind an earthfill dam. Reclamation activities were initiated at the dam in 2008 upon completion of the downstream buttresses. A series of diversion ditches to route water around and away from the dam structure were completed in 2009, and the final closure spillway is currently being constructed with completion scheduled for 2011. The two waste rock dumps contain non-acid generating (NAG) waste rock and potentially acid generating (PAG) waste rock. Resloping of the NAG dump commenced in 2009, followed by placement of overburden and ground preparation. The PAG waste dump will be relocated into the open pit by the end of mine life for subaqueous disposal Various techniques were applied to the borrow areas, including resloping, drainage control, surface preparation, bioengineering, pocket planting and introduction of native species.