2012 Mine Reclamation Symposium: A Success

Craig Stewart, Ministry of Environment chaired the 2012 TRCR Symposium in Kamloops. Here, he is moderating the banquet presentations.

The 2012 Mine Reclamation Symposium was held at the Kamloops Coast Hotel and Conference Centre in Kamloops, B.C. with great success! From September 17 to 20th the Symposium included a jam-packed program of  2 day-long field tours, an interactive workshop on the Mining Association of Canada Toward Sustainable Mining program,  presentation of 20 technical papers, 18 exhibitors were available to discuss their services and products, and 5 reclamation awards, including the Annual Jake MacDonald Jade award, were given out for commendable BC mine reclamation projects. Attendance was excellent with  245 delegates, 10 sponsored First Nation participants attendees and 6 post secondary student helpers. Listings of the exhibitors, contacts and their websites and the First Nation Attendees are found below.

Led by Wendy Gardner of Thompson River University, this was a full-day tour starting with a tour of the Lac du Bois grasslands, then using the elevation gradient, stops at lower, middle and upper grasslands and a running discussion of the  restoration of these grassland areas.

A full day tour of the Samatosum gold mine, Inmet Mining Corporation was arranged by Brent Hamblin (shown here pointing).

Brent Hamblin and crew from INMET led a full day tour of the reclaimed Samatosum Mine. Click Here for the 2012 TRCR Samatosum Itinerary The tour commenced at the Johnson Lake fish spillway and spawning channel, then continued to the mine site for a detailed tour, then departed to the Adams River spawning grounds before finishing with a dinner at Quaaout Lodge.

Above – Images from the Samatosum Mine Tour.
Click on any of the images to expand view and use your keyboard arrow keys (← or →) to navigate.

Ben Chalmers and Tara Shea, Mining Association of Canada, and Michelle Donnelly, Mining Association of BC hosted an interactive workshop at the  Conference Centre. Participants gained an understanding of the TSM initiative, (including its objectives, history, accomplishments and future priorities), how to apply the assessment protocol and understand the external verification process. For more information: 2012 TRCR Reclamation TSM Workshop.

The Symposium Technical Papers were presented over two days (September 19th and 20th) at the Kamloops Conference Centre. The list of papers and authors are provided here in the  2012 TRCR Program_foldout.

Prior to the reclamation awards, thanks were given to a long time Symposium venue coordinator and TRCR member, Art O’Bryan. 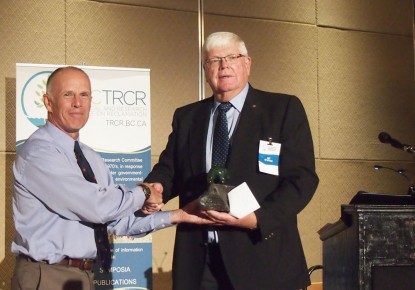 Bill Price, NRCan (left) presenting Art O’Bryan with a jade keepsake for his tireless volunteer work in coordinating the venues for the TRCR.

Prior to the banquet, a keepsake was also given to Bob Hamaguchi, long time member of the TRCR and now retired from Highland Valley Copper. 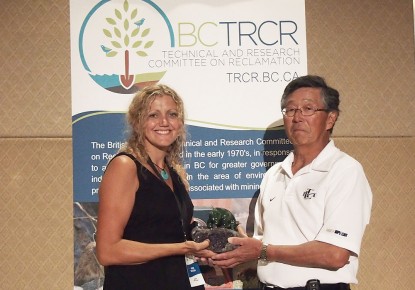 Jaimie Dickson, 2013 Chair of the TRCR presenting Bob Hamaguchi with a jade keepsake for his past role on the TRCR committee.

On this night, Five reclamation awards were presented by Kim Bellefontaine and Al Hoffman, Ministry of Energy, Mines and Natural Gas to recipients that showed Outstanding Achievements in 2011 in the reclamation categories of Placer Mining, Sand and Gravel, Industrial Minerals and Metal Mining, in addition to the BC Jake MacDonald Mine Reclamation Award. The awards are detailed here.

The TRCR Committee for 2012 are shown here: 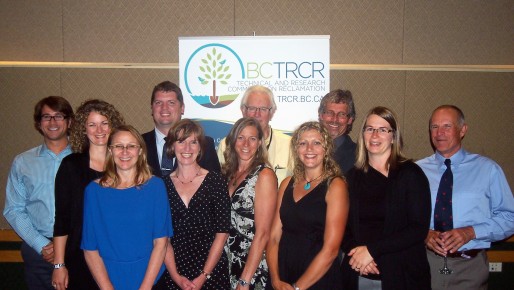