Justin Straker and Anne Garibaldi of Integral Ecology Group and University of Victoria respectively, received the 2010 Tony Milligan Book Award for their paper “Cultural Keystone Species In Oil Sands Mine Reclamation, Fort Mckay, Alberta, Canada” which they presented at the 2009 Symposium. 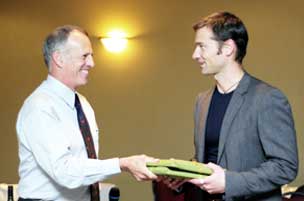 Fort McMurray, Alberta, Canada is the centre of mining extraction of oil sands (bitumen) resources on a large scale – currently three mining operators produce approximately 1,000,000 bbl per day on a footprint of approximately 50,000 ha. Although Fort McMurray is the population centre associated with this development, the indigenous community of Fort McKay is at the epicenter of the existing mine developments. The residents of Fort McKay view human and environmental health as inextricably linked, and thus the effects of development and subsequent reclamation is experienced on both cultural and ecological levels. Fort McKay is actively engaged in working with the local mining companies on issues of mine reclamation design, but for these reclamation efforts to be meaningful to local people, they must take into consideration more than ecological functionality and address the linked social factors. One method of addressing linked social and ecological issues is through use of the Cultural Keystone Species (CKS) concept. CKS – salient plant or animal species with a defining influence on a particular culture — offer a culturally meaningful tether for communities with landscapes in transition. This paper will present results of the application of the Cultural Keystone Species (CKS) model in the community of Fort McKay as a mechanism to address social, ecological and spiritual values in regional mine-land reclamation. Through a literature review and extensive community interviews, five CKS were identified and used to focus discussions and ultimately recommendations for relevant land reclamation within Fort McKay traditional territory. This community-based collaborative project illuminated environmental, social and policy implications for local communities and industry partners.